We are the Black Fusionist Society. We are all children of the African diaspora. We are a fusion of Blackness in all its just forms, which we celebrate, support, and defend. We do not claim royal pedigree of Africian Queens and Kings. But that of tribespeople, tradespeople, peasants, captives, slaves, sharecroppers, domestics, farmers, rebels, factory and shift workers as well as the forgotten. We wear the crown of this lineage proudly.

The Black Fusionist Society was born out of the trauma visited upon Black bodies and minds in the bloodstained streets of Wilmington, North Carolina one Thursday, on Nov. 10th 1898. That day made clear that Black bodies are prey to white supremacy. A super predator that stalks our bodies, our culture and sanity. White supremacy is a pathology that infects every inhabitable space on this planet. White Supremacy needs a crisis to justify its violence and Black people are that crisis. We reject white supremacy, misogynoir and anti blackness in all its forms. The patriarchy, classism, heteronormativity, and ableism are all anit-black and must be defeated. Therefore we follow the “Vibes of the Founding Mothers”, Knowledge, Doubt, Empathy, Culture, Intersectionality, Scientific Method, Failure, History & Progression, Self Care, and Equity. Any member of the Black Fusionist Society must be a child of the African diaspora and follow The Vibes of the Founding Mothers.

Our Blackness is a natural resource. One which has sprung forth civilizations, inventions, art and ideals that have shaped all of humanity. However this planet has not afforded us, Black people, access to this title of Human. In terms of humanity, white supremacy’s default for Blackness is absence. White Supremacy voids our humanity and fills it with their version of monstrosity. When it comes to the perception of Black people, we are not human. Our existence in this world will always be that of either animate objects or monsters. Anti-blackness is so interwoven into this planet’s society that it can’t be undone without undoing society itself. That is why the Black Fusionist Society must work to find a new world to migrate where anti-blackness cannot follow, which we call The Crossover. M-theory is our salvation! Our goals are progression of a better existence for our descendants and The Crossover.

In an ironic twist, a cruel joke, the progression toward The Crossover to another realm will solve the problematic presence of Blackness. The only way this planet will see Black bodies as completely human is in our complete absence. Then we will be monsters of absence. Manifesto 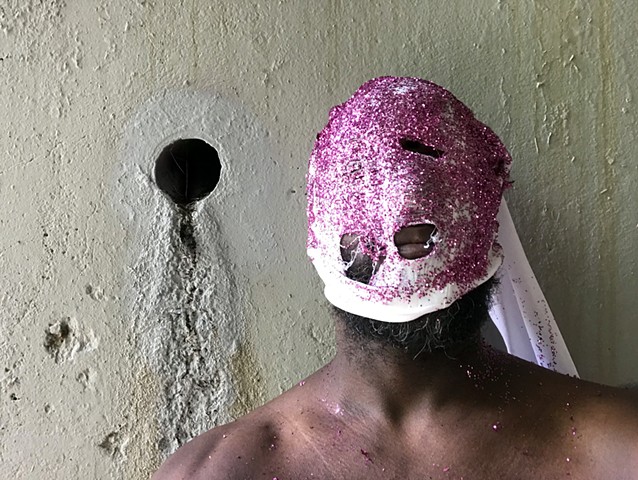 A barrage of bullets tore from Gatlin guns on the evening of Nov. 10th,1898 in the southern coastal town of Wilmington, North Carolina. This signaled the onslaught of death and despair carried out by white rage that would come to be known as the Wilmington massacre which took the lives of 300 Black humans beings. At the same time, a group of domestic workers, all Black women gathered some of the neighborhood children and fled to Pine Forest Cemetery and hid in nearby swamps for two weeks. This saved their lives. While in hiding, the women kept the children’s spirits up by telling stories and singing hymns such as “New Jerusalem” with lyrics like “When the battle is over we will cross over to Jerusalem.” After thirteen days of hiding, five of the women snuck back into town to gather supplies. At nightfall they disappeared with eleven of the children into the nearby woods and marsh. Those women and children went on to start a secret society that came to be known as The Black Fusionist Society (BFS) in a small rural town in North Carolina-whereabouts currently unknown. These five women would come to be known as the Founding Mothers. The eleven Black children they saved are deemed the first generation- we are currently on the 4th.

The Founding Mothers developed a society which grew out of the traumatic event of the Wilmington massacre that centered around ten core beliefs which are called “Vibes” that promote social justice, creativity and science as a means of defeating white supremacy and anti-blackness. The teachings as well as aspects of anti-blackness are personified through “Mythic Beings” that can be summoned, or warded off using rituals, mantras, equations, or totems. They house all of this info in a sacred text called “The Papers”.

Present day members of The Black Fusionist Society are the descendants of the Founding Mothers and the First Generation. This First Generation went on to continue the teachings, ideals, and beliefs set forth by the Founding Mothers, even adding to them as some went on to become scientists, artists, farmers, writers, activists, and academics. Still today they carry-on and add to the traditions and rituals started by the original group. It is believed there are some who currently live in the unnamed North Carolina town, while others are spread throughout the United States and world. The identities and exact number of current members are unknown. Every ten years all members gather to reflect, update, critique, debate and make amendments to their belief system and The Papers.

The Black Fusionist Society believes that white supremacy is a malevolent force- an entity, a pathology that infects every tangible and intangible space BFS believes that anti-blackness is so interwoven into society that it can’t be undone without undoing society itself. Therefore travel to an alternate dimension where white supremacy doesn’t exist to start anew is the only option.

“White Supremacy needs a crisis to justify its violence and Blackness is that crisis. When it comes to the perception of Black people, we are not human. Our existence in this world will always be that of either objects or monsters. That is why the BFS must find a new world. M-theory is our salvation.” -BFS Manifesto

It wasn't until 1968 that Gina Brown and Lisa Williams of the second generation added the idea of interdimensional travel to the BFS belief system. The ultimate goal of the BFS is to work toward developing technology that would allow a future generation the ability to travel to an alternate dimension. This event is referred to as “The Crossover”. In 1995, M-Theory became a plausible avenue to achieve this goal. Since then BFS physicists and engineers have been working to develop this technology, while BFS botanists, artists, social scientists, and political theorists are continuing to imagine a society without oppression.

Each generation believes The Crossover will not happen in their lifetime-hence there is an acceptance of failure-of disequilibrium. For the BFS the true goal isn’t achieving interdimensional travel (even though that is preferred), it is about progress, therefore, the work toward reaching The Crossover is a means of survival. Completely dismantling white supremacy in this world and finding a new one free of anti-blackness through interdimensional travel are both theoretically plausible but highly improbable. Both are just as much aspirational, and hopeful as they are silly, cartoonish and naive. Therefore, the work, the science, the art, the fight is not for themselves. It is all for their descendants.